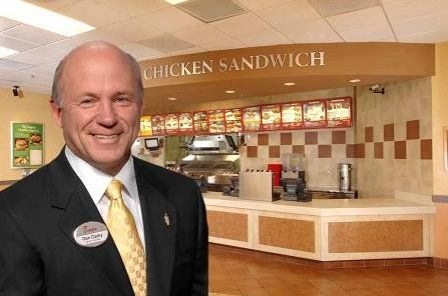 Well, last Wednesday and Friday for Chick-Fil-A came and went. I was blown away by so many of you responding to the post I posted last week regarding all the attention and conflict.

Some of you inquired how my visit to my favorite carrot-raisin-salad restaurant went last Friday. It was completely uneventful. I visited both the Chick-Fil-A’s near our home, and there was nothing abnormal except for the shorter line in the drive-thru.

So what did we learn from / notice about this whole brew-ha-ha? I would like to hear your thoughts. Here are three of mine.

…that most people who “appreciated” Chick-Fil-A on Wednesday cared less about same-sex marriage and more about speaking out against government officials trying to manipulate private sector businesses. People spoke vehemently on the matter.

…that GLAAD doesn’t have the influence that Mike Huckabee has. I am actually not a big fan of Mike Huckabee, but let’s just say that Dan Cathy better send him a Christmas card with a million dollar gift card in it. Better yet, I like the suggestions of some commenters on CNN.com that Chick-Fil-A should give of the proceeds toward world hunger organizations they believe in.

…that there are a lot of folks who are part of the American church that are hurting for guidance and wisdom and insight on how to relate with and care about the gay and lesbian community. Lord, give us wisdom and teach us how to love both You and people.

Earlier this month, Dan Cathy made some comments on marriage and family in a Baptist Press interview that were quite possibly taken out of context by those who affirm same-sex marriage. Moreover, the Baptist Press probably mis-titled the interview in order to get more readership by stirring up controversy. Whether the article was titled poorly is a matter of interpretation I guess. Whether Cathy’s comments were intended to be a shot across the bow toward those in the gay and lesbian community can only be cleared up by Cathy himself. Nonetheless, what those who follow Jesus should now do about it is what I would suggest we need to seriously consider.

May I suggest three specific actions for all of us, both those who have adamantly spoken out from the gay and lesbian community as well as those who consider themselves religious conservatives, but especially all of us who profess to follow Jesus.

First, may we be gracious rather than gregarious. Webster defines “gregarious” as “tending to associate with others of one’s kind” in the sense of only socializing with the people of one’s own tribe or colony. Jesus was not gregarious. In fact, He took significant criticism for not being gregarious (read Matthew chapters 8 through 11). Unfortunately, human tendency is to be gregarious. Both of the opposing sides of the same-sex issue tend to associate only with their kind, and the result is typically a declarative imperative rather than a conversational viewpoint. Protests rather than relationships occur. A culture of grace is rarely displayed.

Next, may we look for opportunities to love others rather than lash out. Jesus said to love your enemies (Matthew 5). Now, I am not suggesting that the opposing sides of this issue are actual enemies. However, they are perceived as such and often act as such. For this reason, I am suggesting that those who say they follow Jesus, who say they love Him, should obey His commands (John 14:15). Jesus taught and modeled love for others. “Greater love has no one than this, that He lay down His life for His friends” (John 15:13). Paul asserted that we are to put the interests of others above our own as Jesus did, not even holding tightly to what was His right or what He deserved in order to be a servant of all of us (Philippians 2:3-11).

The only people whom Jesus lashed out against were those whom He called hypocrites (Matthew 6). It was a word derived from the actor’s guild in Tiberius near the Sea of Galilee. Jesus referred to the religious leaders as actors who were putting on a religious show but were not actually relating with the God of their religion. In some cases they were exploiting God-worship for personal gain (John 2), and in other cases they were proudly displaying how pious they assumed themselves to be (Luke 18). In either case, they were not loving others as much as they loved themselves. May we not be hypocrites.

Finally, may we have ongoing presence rather than only making presentations. It seems that both sides of this issue have become well-versed in declaring their own stories, making their own presentations, even staging their own protests. Mike Huckabee declared on his TV show that today (Wednesday, August 1st) should be “Appreciate Chick-Fil-A Day.” This was in response to the uproar from the gay and lesbian community regarding Cathy’s comments. In essence, Huckabee called all those who stand against same-sex marriage to go out today to support the chicken chain, one that our family happens to frequent. At the same time, the gay and lesbian organization GLAAD has called for national protests today along with a “same-sex kiss day” to be held this Friday, August 3rd, at all Chick-Fil-A restaurants across the nation.

Presentations rather than presence.

Presence would actually mean relationships. I wonder how many of those who will go to Chick-Fil-A today to support the restaurant have a homosexual friend whom they have ever respectfully conversed with about their sexual preferences. I wonder how many who will represent GLAAD with public displays of same-sex affection have ever had public displays of friendship with a conservative evangelical.

To love someone, presence is required. Relating WITH someone is what is imperative. The presentation someone wants to make of which someone is trying to convince another cannot be held in higher value than that other person with an opposing view.

I would suggest that one of the most underestimated aspects of loving someone is simply valuing their story, actually wanting to hear what they have to say. We want to tell our stories rather than listen to someone else’s. We want to value our viewpoint rather than actually try to see from someone else’s. Jesus modeled the opposite for us when He partied with Matthew (Matthew 9), when He went to the house of Zaccheaus (Luke 19), and when He conversed with the woman at the well (John 4). His hope was to show them they were loved and let them respond to that love. It was not just to try to show them they were wrong. You can declare to someone they are wrong with a presentation, but you can only show someone you love them with presence.

THE BOTTOM LINE
I am going to go to Chick-Fil-A on Friday. That is, I am going to go there unless I am in the hospital meeting our newest little one who is due Saturday. If you follow Jesus, I would suggest that you go that day, also. Not to try to counter-protest, but rather to converse with the protestors. Possibly create a friendship. Offer a bottle of water. Maybe even have a meal together, even if it is at another restaurant near that Chick-Fil-A.

You can read CNN.com’s article that prompted my writing this post by clicking here.